There is a little girl in my work.

The girl is having a good time enjoying true freedom.

Then I draw her.

Reminding myself that my mother, who is my friend and someone who protected the family, was a girl before becoming a mother.

The heartbreaking gratitude for mothers that have not been able to have certain experiences is not just my story, but all mothers around the world.

The direction of my work is always directed to my mother in a series of life connected with the past, present, and future.

The childhood in my work has no affection or memories of my father, so it is filled with longing and adoration for my mother.

You cannot stop the flow of time.

I feel that in the flow of time I started out as a child and it continues to form who I am today.

My work is based on humanism, which has been recreated through a medium of family, and I have consistently worked with this subject since 2013.

The image derived from the imagination of humanism that appears in my work is the theme of family.

One of the main characteristics of the work is that the image of a family appears through the subject of a mother, among which the girl represents the mother and an animal that appears with her represents me.

To become an animal and be with my mother who has become a little girl is a virtual space that can not exist in reality, and it reflects my environment growing up, as well as the meanings of a family such as connection, protection, stability, and not protection.

I wanted to demonstrate that the reason for life exists in the fact that we live together with others even though we may seem to be alone. I also wanted to contemplate the importance of family, which can act as a strong fence or a resting place in the harsh and difficult world.

As such, family for me turns from a group of people to a place of relaxation and purification as well as ashield where my mother is in the center when going through tough times.

The girl who appears in my work imagines reuniting with her mother in the same space as a friend.

In reality, my mother is a lady that works at the market, but in my work and imagination, she will always remain a girl who has a lot of freedom.

This is the image of my friend, my mother.

1996 The graduation of Korean art painting at Busan Silla University

I Love you Exhibition(Edenvally/ Yangsan ,Korea) 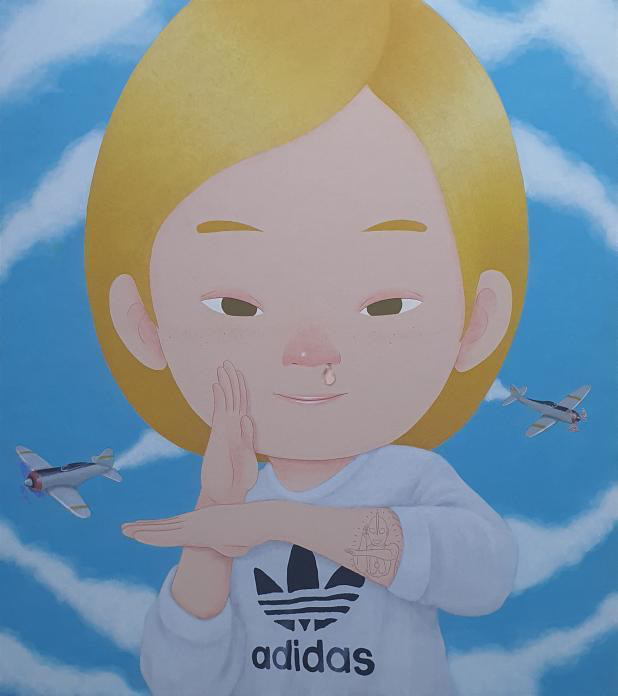