THE DISTANCE BETWEEN US

VILLAZAN LAB is pleased to present “THE DISTANCE BETWEEN US” an exhibition featuring new paintings by SUN-KYO PARK that have never before been shown in an exhibition. The presentation also marks the artist's first exhibition with the gallery in Madrid.

The Korean artist Sun-Kyo Park was born in Jeonju, 1990 in a Christian family and grew up in a culture where traditional Korean and Christian cultures intermingled, whose background created a diversity of thought. The Seoul-based artist graduated from Hoseo University with a degree in Visual Design in 2015 and has exhibited all around the world in different international galleries and Art Fairs, as well as winning an award Independant 2019 Korea.

In this exhibition “The distance between us” the artist focuses on the concept of distance as an essential element for our own survival. In the artist’s own words “we survive because the organs in our physical bodies keep a reasonable distance from each other, rather than being tightly packed together”. This is why his works make us wonder about the distance between our mind and body. “Do people prefer spiritual or physical experiences?” Sun-Kyo thinks that both experiences are complementary, they intersect and push each other. In fact, the artist sees the structure of the human being as no different from the structure of the universe which is moving as each person's ideas come together: “the way to understand a person is to understand his physical and mental realm, is to understand the universe and the society in which his inner point of view resides”.
‍
The exhibition displays 15 new paintings divided in 4 different series; sitting cross-legged series; contact to the… series; “Draw a line on the desk”, “The stage is this way” and “New vision” series; and “What are you waiting for?” and “Let go of your father’s arm”.

The “sitting cross-legged series” refers to an ancient Korean tradition in which people sit on the floor in this cross-legged position. “It is a series created through the memory of the weekly Friday worship services held in my home when I was a child. The memory of people from all parts of the church gathering in a house to talk and eat remains a familiar, reverent and warm memory within me. I wanted to bring out and show the air of mystery in the memory, which seems to have become a promise that no one will turn their back on each other, even if there is silence. This could symbolize the time spent examining oneself and trusting the viewer, while showing a magical belief in a little distance between each other (each other's unknown territory)”, Sun-Kyo relates.

“Contact to the…. series” are inspired by the Tarot, which analyses your tendencies, just like today's psychometric tests (fire, earth, air, water). In the Orient there is a way of distinguishing people in a similar way, which is called the "Sassanian Constitution". With this series, Sun-Kyo wants to make people think about what type of person they are through this method of classification.

The painting “Draw a line on the desk” is an expression of the artist's thinking about "distance". The figures look at each other in a theatrical scene. The figure on the left, completely immersed in the show, has complete initiative in the work. The figure on the right is almost pushed out of the scene, and the lines drawn on the table symbolizing the existing order are crossed. However, the realm of absolute order does not change at all.

“The stage is this way” deals with the worst experience the artist has had this year: ‘gaslighting’. We do not know if the characters are outside the emergency exit or in the reflection of the stage, but we can reflect on whether the situation is caused by a regret or hand petition that expresses the desire of others.

The “New vision” painting refers to the act of digging an ear with an earpick which is a very limited act that can only be done by a very close person. Thinking about raising a family leads the artist to imagine the best experience to expand horizons that he could ever have in life: to become the father of a child, the husband of a human. It is more than just a sequence, it represents the need to protect and be protected.

The painting “What are you waiting for?” depicts a man escaping from the heavy floods in Seoul in the past months. Sun-Kyo Park was strongly affected by the images of the disaster and wants to make people think about global warming and how it is affecting people.

Sun-Kyo is strongly influenced by Nietzsche's philosophy as we can see in the painting “Let go of your father’s arm” which refers to Nietzsche’s superman and human rules, especially father’s rules. For Sun-Kyo the father's rule is something to be relied upon and worshiped, and it is something we will often cling to. Sun-Kyo believes that if we want to be free from bondage and established rules we need to remember that everyone has wings and is able to fly independently.

The exhibition “The distance between us” by Sun-Kyo Park will be on view through November 26 at Villazan LAB. 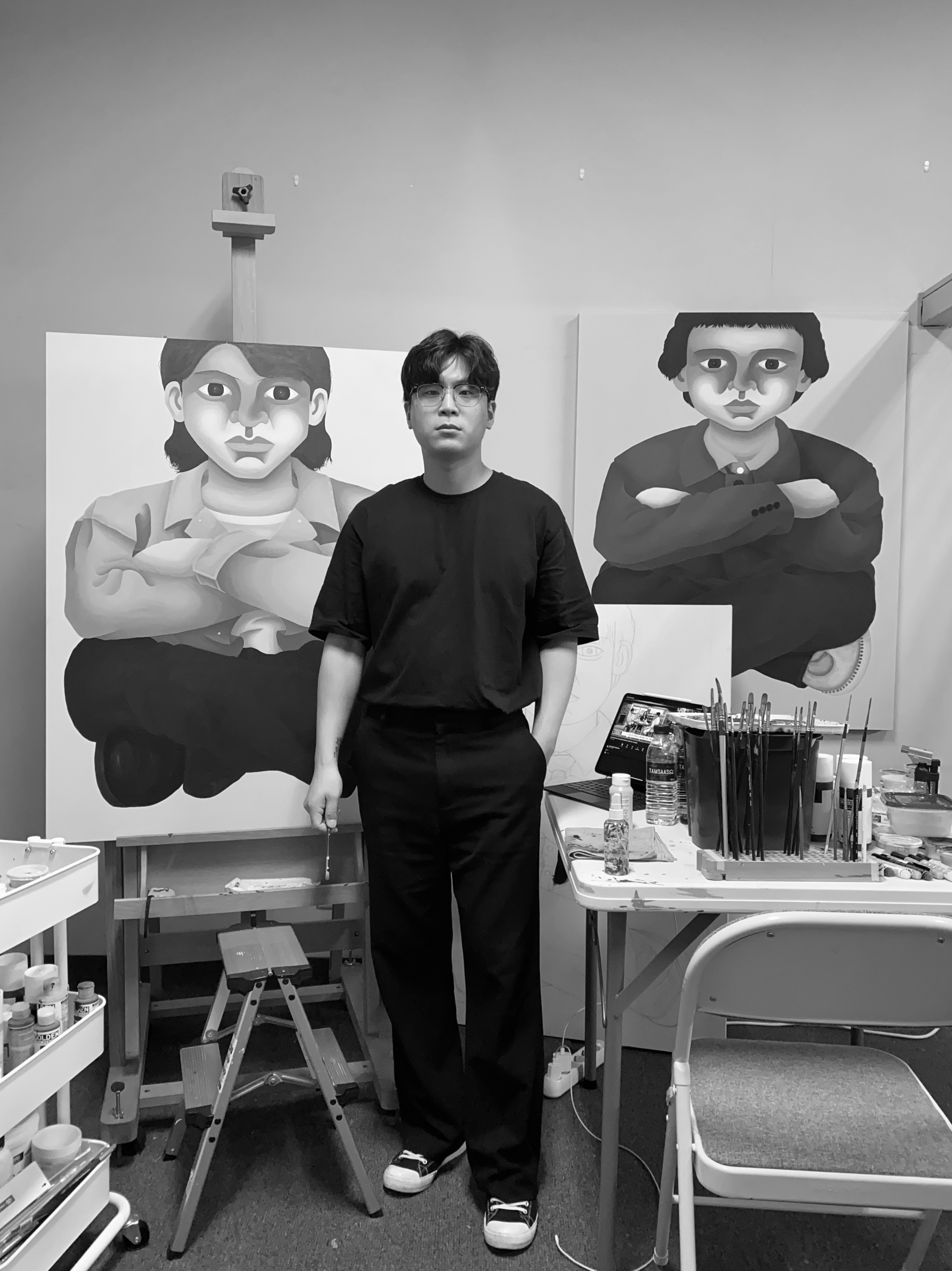